With last Sunday’s message I tried to undermine the claim that “(macro)Evolution is a Fact”–especially the theistic variety.  I argued it cannot be squared with the Bible, and in fact its tenets undermine the gospel itself since if there was no first Adam, where does that leave us with the second Adam (Romans 5 & 1 Corinthians 15)?  Here are some additional resources for thinking about science and God’s creation.  Browse.

I don’t agree myself with everything on each of these sites (even when I do grasp what they’re saying!).  For example, as I indicated Sunday, though I think the earth is young (10,000-12,000 years), it’s entirely possible that it’s much, much older.  No matter how vociferously some argue the point, the Bible simply doesn’t say.

Some of those below quarrel fiercely with each other about such matters.  When it comes to the fine points of Creation, in my opinion Christians should not go to war with each other over what the Bible’s either silent or unclear about.

When asked “How should an evangelical Christian decide who to support in this election?” Timothy George, founding dean of Samford University’s Beeson Divinity School and chairman of the board of the Colson Center for Worldview, responded this way (abbreviated remarks):

Greg Strand, director of theology and credentialing for the Free Church, wisely added a fifth recommendation:

Regardless of who wins the election in November, the spiritual and moral issues that ought to inform our political acts will remain on the agenda. Pray! 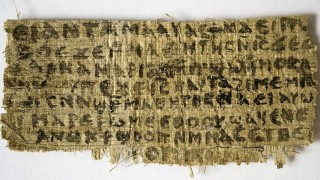 At a conference in Rome this week a piece of papyrus the size of a business card was offered as evidence that Jesus may have been married.  Harvard Divinity prof Karen King admits the 33 Coptic (Egyptian) words on the scrap which include Jesus saying “My wife…” (remainder is cut off) to his disciples–followed by him saying she is able to be his disciple, offer nothing like proof.  But Dr. King claims, “Christian tradition preserved only those voices that claimed Jesus never married.  The Gospel of Jesus’s [sic] Wife now shows that some Christians thought otherwise.”

Initial reports say the fragment’s a 4th century translation of a 2nd century writing.  Some hope that evidence that Jesus had a wife and/or women in his chosen band of disciples, would overturn Christianity’s long-held teachings about women in ministry, and torpedo the Catholic Church’s requirement that priests remain unmarried and celibate.  But dubious scholars from Quebec to Egypt are coming out of the woodwork to suggest it’s a forgery.  Some observers wonder if this week’s announcement was meant to escalate the value–and subsequent selling price, of the piece owned by an anonymous collector.

The Bible nowhere suggests that Jesus had a wife while on earth.  Doesn’t say He didn’t, it’s just that there’s no hint of it.  Then again, Jesus does have a wife.  Let me introduce you to His beloved Church; isn’t she a beauty?  The collected saints of all time whom He wooed, courted, sacrificed Himself for, sanctified and cleaned”..to present [her] to Himself without spot or wrinkle…,or blemish” (Eph.5:25-27).  We’re the bride.  But the big wedding celebration is yet to come (Rev.19:7).  Unlike the wife’s dowry which some cultures demand, Jesus has already paid the price.  Gotta love the Church because Jesus does; He died for her and claimed her as his bride.

We’ve all seen people react to suffering by getting angry.  Ok, most of us have been that person.  Know why?  I mean, why people get angry when things don’t go their way?

30 years ago Francis Schaeffer claimed that the premier gods of westerners were personal peace and prosperity.  Everybody knows what prosperity is, but the personal peace he spoke of was a desire to be left alone, unconcerned with anyone or anything else in the world.  It’s no different today.

The personal peace he meant was a kind of autonomy/privacy that’s oh-so-American.  But scratch it more deeply and buried beneath this everyman idolatry could be the hope–maybe even the expectation that nothing should go wrong for me; my perfect world should not be disturbed.  Which could explain why people get so mad when it is.  Why they go ballistic when their prosperity or peace leave town.

Sometimes it’s due to a big blow.  Like the widow who began screaming and cursing shortly after I said the “Amen” at her husband’s funeral.  (She was mad at God and her dead husband.)  Sometimes its a small blow.  I remember as a teenager just going postal when I couldn’t get the motorcycle started I’d borrowed from a friend.  Not exactly a tragedy of cosmic proportions but you’d think it was by the library of epithets I hurled at the heavens.

My last post on suffering discussed the person who simply resigns himself/herself to the inevitable disappointments.  Maybe like Eeyore, someone who bleakly expects that’s how life’s going to be and doesn’t do anything about it when it is.  In this post, it’s the anger response; the fury, rage, the indignation.  This one, I have much history with.  Maybe you do too.

Angry at whom?  Anger is usually directed at someone: a person at fault, the one to blame.  If his girlfriend dumped him, she’s in his crosshairs.  If his boss demoted him, he  is.  If no one’s to blame–say, she gets cancer, it’s a little trickier.  Who’s to blame for a dreaded disease?  With a little investigation maybe you can pin it on a nearby manufacturer who might have contaminated your well.  Or, the secondhand smoke you inhaled from a spouse.  But what if your search yields no one to blame?

People still get mad.  At God.  Even those with barely a vague notion of God–or Christians who don’t believe God is sovereign to the degree the Bible says, believe instinctively that He’s running the show.  If things go badly for them, He’s ultimately their Fall Guy.

The best an atheist/agnostic can do is blame fate–or some other nebulous substitute. But the Christian–or even the God-believer, knows God could have kept her from cancer, could have stopped the divorce, could have snatched her son from the road, could have intervened with her boss, could given her more money, or….

Job suffered like few people have: his wealth was either stolen or destroyed, his 1o children were killed, his wife turned against him, his reputation was in tatters, and his health was ruined.  From Job 3 to Job 31 he repeatedly protested that he did not deserve to be treated like this.  Humanity’s twin convictions were firmly anchored: God’s in control and did this, but I don’t deserve it.

To which God replied: Will you even put me in the wrong?  Will you condemn me that you may be right (Job 40:8)?  To lash out at God over suffering says God’s made a mistake: He’s wrong, I’m right.  Yet basic Bible theology teaches us that we are by nature wicked (Rom.3:10, 23), and thus objects of God’s wrath (Eph.2:3).  Therefore, all the suffering we experience, is deserved.  Not that a child dies because we told a lie at work.  Rather, that since we are sinners both by nature and by practice, we are not deserving of special treatment that puts us out of reach of suffering.  Indeed, what is not due us are God’s blessings: life, health, children, work, friends, peace, security, family, education, respect, abundance, love, and most of all, deliverance from our sins and God’s judgment, and the blessing of His favor to us in Christ.

Anger at suffering can only be moderated by a growing recognition that no, I don’t deserve anything but judgment, death and hell.  EVERYTHING else is a bonus.

Tomorrow I’ll be preaching on God’s plan for man’s labor; how we can glorify God on/through our jobs and live out the gospel.  Below are some suggestions from Bob Thune, lead pastor of Coram Deo Church in Omaha, NE.