Skip to content
Even though the sermon series on the gospel is ended, I’ll never finish preaching the gospel.  Here’s another great book on it: Tullian Tchividjian’s Jesus + Nothing = Everything. 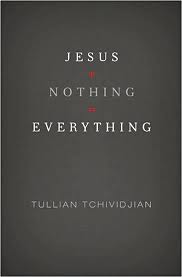 Smell the scent of gospel from Paul’s letter to Colosse Christians.  In the middle of a firestorm at his new church several years ago, Tchividjian‘s study of Colossians drove this gospel truth deep into his soul: Because Jesus was someone, you’re free to be no one (75).  In other words, people who have been rescued by the gospel, have a new, a sealed, and a supernatural identity that doesn’t ebb and rise and fall by circumstances or what others think of you.  But that’s just the tip of the book’s iceberg.
Though 33 years in Christ, as a virtual babe in the gospel woods I still read some of this stuff in disbelief.  It’s a disbelief that goes in two directions: one, that only Christ’s work is the gospel–quite apart from what I do or fail to do.  And two, that I could spend 7 years in Bible College and seminary, serve years as a pastor–indeed, be a Christian so many years, promoting something of a schizophrenic gospel.  That is, I paid lip service to grace, but preached and lived the law.  As Galatians 3:24 and Romans 7 point out so elegantly, not only couldn’t the law ever deliver anyone, God never meant it to.  It was meant to drive home the ugly truth that sin is epidemic and its powerless victims need outside help.

Conversely, every person rescued by Christ has been given a standing of the highest order, and has been promoted to the heavenlies beside Christ (Eph.2:6) despite an abysmally poor performance.  That affects a person’s self-perception, his fears and anxieties, her confidence, her outlook, his abilities, her behavior, and his thinking.

Tchividjian says what can’t be repeated often enough: the way to defeat the practice of sin is counter-intuitive: stop spending so much time peering into the darkness of your soul and spend more time peering into the light of the gospel.  He puts it this way: In short, I spend way too much time thinking about me and what I need to do, and far too little time thinking about Jesus and what he’s already done.  And what I’ve discovered, ironically, is that the more I focus on my need to get better, the worse I actually get.  I become neurotic and self-absorbed.  Preoccupation with my performance over Christ’s performance for me makes me increasingly self-centered and morbidly introspective (174).

Ahhh, love the smell of the gospel!