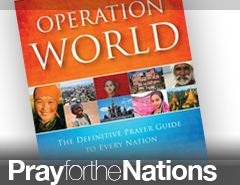 Other than your Bible, a basic tool to take believers’ concern for the world’s lost to the next level–as well as impact those lost people through prayer, is Operation World, the Definitive Prayer Guide to Every Nation.  Released a year ago, Jason Mandryk’s 7th edition is a gold mine of info about the world’s nations, its people groups, their religions, the gospel work that is or isn’t going on among them, and what to pray for.  Which is where we come in.  You may not be called to Craigslist all your stuff for an airline ticket to a dot on a map where there’s an unreached people group and no cell service.  But you are called to be involved in getting Christians to that spot, keeping them there, and interceding for their success.  When God saved us, we all became enlistees to serve Christ in His mission of building and expanding His kingdom.  Prayer is a contribution everybody can make to that effort.  The book will set you back about $13.50 at CBD and under $13 at Amazon.
Just watch out.  It has been proven time and time again that believers who pray for other people often are moved to get involved in some way with those same people.  You might end up spending money, time, or something else on their behalf.
Representative of this are founders of the e3 Partners mission organization, Tom and JoAnn Doyle.  “Operation World changed our lives!  In 1999, my wife and I began praying for a country each night in Operation World.  God opened our hearts wide for lost people, especially in the Middle East.  Every night as we would read about Iran, Israel and other nations, our hearts were gripped with the need to reach these countries for Christ.  Within two years, God called us to leave senior pastoring a local church in the Colorado Springs area, and to go to the very places that we had been praying for!  So as you pray through Operation World, just remember, God may radically change your world to reach His world.”
I was a sinner.
Condemned.
What could I do?
“I can rescue you,” I heard Jesus say.
I turned in faith and He forgave me, made me God’s son.
I rejoiced.
And went on my way.

That was a year ago.  I’ve shared my story of being rescued with a lot of people who’ve wished me well.  Privately, my wife tells me she’s not seen much change in me.  It’s true, I’ve still got a few things that make me human: a short temper, I don’t help with the kids all that much, and I do enjoy some me time on certain websites that some of those people at the church would probably object to.  And no, I don’t worry myself too much with people around me who are lost like some say I should.  But hey, I’m saved!  That’s what matters!

I should probably read my Bible one of these days but I’ve found it’s really hard to understand.  Some of our friends keep saying I should come to worship, but I don’t see the need.  I can just as easily talk with God in my garage or out on a trail in the woods.

I do pray.  Just the other night our daughter was 45 minutes late for her curfew and hadn’t checked in.  I was really praying then!

I’m a pretty good guy I think.  Ok, so maybe I don’t help a lot of people but at least I don’t hurt anybody.  That should count for something!


Examine yourselves to see whether you are in the faith; test yourselves.  2 Cor.13:5

They claim to know God, but by their actions they deny him.  Titus 1:16

The Lord knows those who are his…  Everyone who confesses the name of the Lord must turn away from wickedness.  2 Tim.2:19

“Not everyone who says to me, ‘Lord, Lord,’ will enter the kingdom of heaven, but only the one who does the will of my Father who is in heaven.  Many will say to me on that day, ‘Lord, Lord, did we not prophesy in your name and in your name drive out demons and in your name perform many miracles?’  Then I will tell them plainly, ‘I never knew you. Away from me, you evildoers!’  Matt.7:21-23

Is all mission work equal?  Not anymore.  Not when 90% of our missionaries are deployed to “Christianized” people groups.  Not when only a penny out of every $100 given to missions goes to those working among people who have no Christian near enough–or none who speaks their language to tell them about Jesus.

It was poor judgment on my part.  We scheduled our wedding 2 days before the opening day of Pennsylvanian’s deer season.  Course, at the time I wasn’t a hunter.  Nor the son of a hunter.  There wasn’t one in the family; not my dad, not his dad.  Nor my other grandfather.  Except for the family I’d married into, my closest hunting relative was an uncle.  So, no need to avoid a late November wedding lest hunting season conflicted with future anniversaries.

The next year my company closed on the first day of deer season so Betty and I decided to celebrate our first anniversary in the woods.  Hunting.  Our rifles were mostly window dressing.  Neither of us had any intention of hunting.  Good hunters work hard at minimizing odors and sounds but my wife and I talked irritatingly loud, ate our picnic lunch noisily, and generally drove other hunters away.

During the day we heard gunshots, watched as a fox ran by, but hadn’t seen any whitetails.  Mid-afternoon that began to change as one doe after another soundlessly appeared.  Beautiful animals, regal, elegant, so stealthy.  By the 4th or 5th one I was hooked.  The change from spectator to hunter was all but instantaneous.  In the 38 years since, I’ve taken several nice buck and numerous does with both rifle and bow.

Now I’m done.  After last season, I quit.  I’ve threatened to write the PA Game Commission a letter but probably won’t.  What drew me to hunt deer–seeing them, has been reversed by Game Commission rules which have severely reduced the state’s deer herd.  Especially on state land where I hunt.  It’s not unusual to hunt several days without seeing so much as a tail.  I love to hunt even if I don’t bring home venison.  But with not seeing deer in the woods becoming the norm, I’m done.

I have other hobbies and nobody will suffer if I don’t hunt.  But what if that’s our thinking about sharing the good news?  Could not seeing fruit lead us to say, “Fine, I’m done.”?  In that case, others might suffer.  God assigned each of us to be on mission right where we are.  Wherever a believer doesn’t act on his/her assignment, there’s a hole in the coverage.  Are each of us attentive to the Spirit’s promptings?  Are we available for God to use in someone’s journey towards God’s salvation?

Admittedly it’s discouraging when we don’t see fruit from our efforts.  But do not be dismayed.  God always gets his man.  Or his woman.  Or his child.  Our job is to tell.  His is to call.

Osama Bin Laden is dead.  So is Fazul Abdullah Mohammed (Somoli who directed 1998 Kenyan & Tanzanian US embassy bombings).  Drones took out Ilyas Kashmiri (Mumbai attack leader based in Pakistan) as well as Al-Qaeda’s American-born Al-Awlaki in Yemen.  In a matter of months four of the world’s most notorious jihadists have been taken out of play.
But Al-Zawahiri was crowned OBL’s heir.  It’s like frogger: take out one and another takes his place; men dedicated to the destruction of the west and Israel.  Hate, a bloodlust stirred by religious zeal, and revenge drive them to inflict as much destruction and death as they possibly can.

While I realize these are professing Muslims, I do not think they have much in common with the world’s Muslims–the vast majority who go to mosques, recite the Qur’an in Arabic, but have no plans to dress up as a bomb.  The debate will not end about whether the many peaceful Muslims or the few jihadists are most faithful to Muhammad’s words.  But this much we know: they all need the good news, they all need to discover the God who–instead of shedding His enemies’ blood, shed His own on their behalf.

What will it take to reach the planet earth’s 1.52 million Muslims with the good news about Jesus?  What technology will be required, what resources and plans?  In addition to the willingness of growing numbers of gifted Christians to die, I think it will be love that leads to risk-taking.  Will well-intentioned strategies or goals matter if none of us will take some risks for Jesus?  Start a gutsy conversation with a Jordanian Arab on a plane or a woman wearing a Hijab at the supermarket.  Set aside some time to pray with your spouse or children for Muslims (get “Operation World” to guide you).  We–every person who claims to love Jesus Christ–could decide that lost Muslims are no longer acceptable.  Think of it.

And found it.  Following international pressure including words from the white house, Iran scrambled for a more legitimate crime for which to execute Pastor Youcef Nadarkhani.  The government now says they’re going to put Nadarkhani to death for rape, extortion, and security issues (specifically, they say he’s a Zionist–an agent of Israel).  Huh?  Despite court records clearly stating apostasy was the sole issue originally, it looks like they’ll try to dodge the world’s condemnation with this legal sleight of hand.  Keep asking our Father to intervene!