The gospel I grew up with was polluted with works.  It’s not that anyone ever specifically claimed that a person’s works augment Christ’s work on the cross, but it was implied.  Never really trying to intellectually make these two incompatibles compatible, I simply drifted through life believing that Jesus died to save me yet somehow I had to help save myself by what I did. 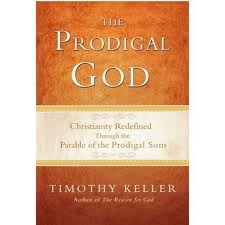 Which turned me into a stubborn moralist.  Despite teaching orthodox theology I scrutinized myself and others by a measuring bar of behavior and attitude.  Even once I concluded that Jesus’ work and His alone saved people completely, my functional faith formula still demanded human works.  Which made me impatient with others who didn’t measure up, and drove me to the depths of despair when I didn’t.

Tim Keller talks about me and similar species in his must-read The Prodigal God in which he unpacks Jesus’ well-known parable we say is about the prodigal son (even though it’s really about 2 sons).  If you’re wondering why anyone would label God the prodigal, Keller explains: The word “prodigal” does not mean “wayward” but, according to Merriam-Webster’s Collegiate Dictionary, “recklessly spendthrift”.  It means to spend until you have nothing left.

Keller sees not just one lost son, but two and takes aim at the moralists who think their goodness is just another way to get God to do their bidding.  These were not just the Pharisees of Jesus’ day, but the many elder brothers who dot our churches today.  Seriously, this is one “Friday book” no Christian or professing Christian should skip.  (Great for unbelievers too.)  It’s just 133 pages long, and the book’s small to begin with.  Keller has a brilliant mind but talks and writes in a way easy to understand.

What is the problem [with the elder brother kind of person]?  Pride in his good deeds, rather than remorse over his bad deeds, was keeping the older son out of the feast of salvation.  The elder brother’s problem is his self-righteousness, the way he uses his moral record to put God and others in his debt to control them and get them to do what he wants.  His spiritual problem is the radical insecurity that comes from basing his self-image on achievements and performance, so he must endlessly prop up his sense of righteousness by putting others down and finding fault.